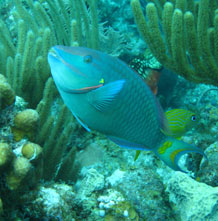 A new study has found that pollution from fine particles in the air – mainly the result of burning coal or volcanic eruptions – can shade corals from sunlight and cool the surrounding water resulting in reduced growth rates.

Although coral reefs grow under the sea it seems that they have been responding to changes in the concentration of particulate pollution in the atmosphere, according to a paper published in the journal Nature Geoscience by a team of climate scientists and coral ecologists from the UK, Australia and Panama. Corals are colonies of simple animal cells but most rely on photosynthetic algae for their energy and nutrients.

Lead author Lester Kwiatkowski, a PhD student from Mathematics at the University of Exeter, said: “Coral reefs are the most diverse of all ocean ecosystems with up to 25% of ocean species depending on them for food and shelter. They are believed to be vulnerable to climate change and ocean acidification, but ours is the first study to show a clear link between coral growth and the concentration of particulate pollution in the atmosphere.”

Dr Paul Halloran of the Met Office Hadley Centre explained: “Particulate pollution or ‘aerosols’ reflect incoming sunlight and make clouds brighter. This can reduce the light available for coral photosynthesis, as well as the temperature of surrounding waters. Together these factors are shown to slow down coral growth.”

The authors used a combination of records retrieved from within the coral skeletons, observations from ships, climate model simulations and statistical modelling. Their analysis shows that coral growth rates in the Caribbean were affected by volcanic aerosol emissions in the early 20th century and by aerosol emissions caused by humans in the later 20th century.

The researchers hope that this work will lead to a better understanding of how coral growth may change in the future, taking into account not just future carbon dioxide levels, but also localised sources of aerosols such as industry or farming.

Professor Peter Mumby of the University of Queensland put the study in the context of global environmental change: “Our study suggests that coral ecosystems are likely to be sensitive to not only the future global atmospheric carbon dioxide concentration but also the regional aerosol emissions associated with industrialisation and decarbonisation.”

The study was financially supported by a NERC grant, the University of Exeter and the EU FORCE project.