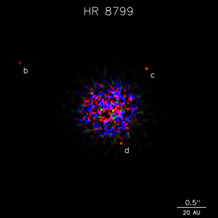 A discovery by a team including a scientist from the University of Exeter has won the 2009 Newcomb Cleveland Prize of the American Association for the Advancement of Science (AAAS).

Dr Jenny Patience of the University of Exeter was part of an international team that captured the first-ever image of multiple planets orbiting a star other than our own.

The Association’s oldest prize, now supported by Affymetrix, the Newcomb Cleveland Prize annually recognises the author or authors of an outstanding paper published in the Research Articles or Reports sections of the leading academic journal Science between June and the following May.

Dr Patience and her colleagues were awarded the $25,000 prize at an event held at the meeting of the AAAS in San Diego, California, on 20 February.

The research team was led by Dr Christian Marois of the National Research Council of Canada’s Herzberg Institute of Astrophysics (Victoria, BC, Canada). While researchers typically infer a planet’s presence indirectly through its influence on the host star or an intervening star, this team imaged three planets directly using two of the largest telescopes in the world, the Gemini North and Keck telescopes on Mauna Kea in Hawaii.

The star, HR 8799, is 128 light years from Earth. It is a ‘main sequence star', similar to the Sun in that it is in the prime of its life, fuelled by nuclear reactions within its core, but it is about 1.5 times more massive than the Sun.

The system resembles a scaled-up version of the three giant planets in our solar system, according to the authors, with planets more massive and orbiting around the star at larger distances than the corresponding solar system planets.

Dr Jenny Patience of the Astrophysics Group in the University of Exeter's School of Engineering, Mathematics and Physical Sciences, said: “We’ve been trying to capture images of extrasolar planets around stars for many years so it was incredibly exciting to capture pictures of three at once. This was a key step in the journey towards understanding what is out there, beyond our own solar system. I’m delighted that our discovery has been recognised through this prestigious award.”

The second award-winning study was by a team that used the Hubble Space Telescope to image a planet they called Fomalhaut b, orbiting its star, within a large dust belt. The researchers estimated that the planet’s mass is no greater than several times that of Jupiter.

“These two papers are landmark discoveries, as they report the first definitive, direct imaging of exoplanets: the planets that orbit distant stars,” Science Editor-in-Chief Bruce Alberts explained. “They result from remarkable technical advances in both imagining and data analysis, which make it possible to separate a planet from its host star. The results are likely to change our view of how planets originate. The ultimate goal is the direct imaging of Earth-like planets, so as to search for biosignature gases. This task will be very much harder, since such planets will not only be considerably smaller and dimmer, but also much closer to a sun-like star. Nevertheless, with this first giant step, it does not appear impossible.”

The prize was established in 1923 with funds donated by Newcomb Cleveland of New York City and was originally called the AAAS Thousand Dollar Prize. It is now known as the AAAS Newcomb Cleveland Prize, and its value has been raised to $25,000. The winner also receives a bronze medal, complimentary registration and reimbursement for reasonable travel and hotel expenses to attend the AAAS Annual Meeting. Eligible Science papers include original research data, theory, or synthesis. They should represent a fundamental contribution to basic knowledge, or a technical achievement of far-reaching consequence. Winning nominations also should be a first-time publication of the author’s own work.

The 2008-2009 Newcomb Cleveland Prize Selection Committee included the Science Editor-in-Chief as well as John I. Brauman of Stanford University, Richard M. Losick of Harvard University, Michael S. Turner of the University of Chicago, and AAAS CEO Alan I. Leshner, executive publisher of Science.

The University of Exeter has one of the UK’s largest astrophysics groups working in the fields of star formation and exoplanet research. The group focuses on one of the most fundamental problems in modern astronomy – when do stars and planets form and how does it happen? They conduct observations with the world’s leading telescopes and carry out numerical simulations to study young stars, their planet-forming discs, and exoplanets. This research helps to put our Sun and the solar system into context and understand the variety of stars and planetary systems that exist in our Galaxy. Over the next three years, the University is investing £80 million in five areas of interdisciplinary scientific research, one of which is Extrasolar Planets.