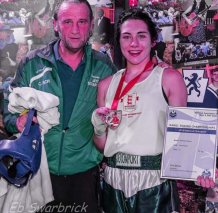 Bethany competed in the Class D finals of the National Association of Boys and Girls Clubs (NABGC) boxing championships with her boxing club Devonport, in Plymouth.

The championships took place at The Gorton Monastery in Manchester on Thursday 29th November, where Bethany fought 3x3 minute rounds against her competitor to win the female national title at 57kg.

“Winning this championship was one of my most rewarding achievements, I genuinely felt accomplished and knew in that moment that all of my hard work and discipline had paid off” said Bethany.

“I’ve been boxing for almost 5 years now and I got into it after doing kickboxing. I find boxing much more professional.”

This is Bethany’s second time winning the NAGBC championship, after she also won in 2015.

The NAGBC is a registered charity which exists to support member organisations with advice, networking and events for their network of member clubs for boys and girls under 25.

Each year the National Amateur Boxing Championship is hosted by a variety of NABGC member organisations, who work together to put on this prestigious championship for the young people of the UK.