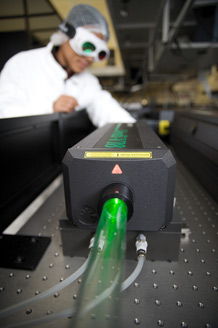 The development of ‘brain-like’ computers has taken a major step forward today with the publication of research led by the University of Exeter.

Published in the journal Advanced Materials and funded by the Engineering and Physical Sciences Research Council, the study involved the first ever demonstration of simultaneous information processing and storage using phase-change materials.

This new technique could revolutionise computing by making computers faster and more energy-efficient, as well as making them more closely resemble biological systems.

Computers currently deal with processing and memory separately, resulting in a speed and power ‘bottleneck’ caused by the need to continually move data around. This is totally unlike anything in biology, for example in human brains, where no real distinction is made between memory and computation. To perform these two functions simultaneously the University of Exeter research team used phase-change materials, a kind of semi-conductor that exhibits remarkable properties.

Their study demonstrates conclusively that phase-change materials can store and process information simultaneously. It also shows experimentally for the first time that they can perform general-purpose computing operations, such as addition, subtraction, multiplication and division. More strikingly perhaps it shows that phase-change materials can be used to make artificial neurons and synapses. This means that an artificial system made entirely from phase-change devices could potentially learn and process information in a similar way to our own brains.

Lead author Professor David Wright of the University of Exeter said: “Our findings have major implications for the development of entirely new forms of computing, including ‘brain-like’ computers. We have uncovered a technique for potentially developing new forms of ‘brain-like’ computer systems that could learn, adapt and change over time. This is something that researchers have been striving for over many years.”

This study focused on the performance of a single phase-change cell. The next stage in Exeter's research will be to build systems of interconnected cells that can learn to perform simple tasks, such as identification of certain objects and patterns.

The University of Exeter is investing £230million in science and engineering across key themes, including Functional Materials.

The paper, published in Advanced Materials, can be accessed here: http://onlinelibrary.wiley.com/journal/10.1002/(ISSN)1521-4095/earlyview

The Engineering and Physical Sciences Research Council (EPSRC) is the UK’s main agency for funding research in engineering and physical sciences. EPSRC invests around £800m a year in research and postgraduate training, to help the nation handle the next generation of technological change.

The areas covered range from information technology to structural engineering, and mathematics to materials science. This research forms the basis for future economic development in the UK and improvements for everyone’s health, lifestyle and culture. EPSRC works alongside other Research Councils with responsibility for other areas of research. The Research Councils work collectively on issues of common concern via research Councils UK.