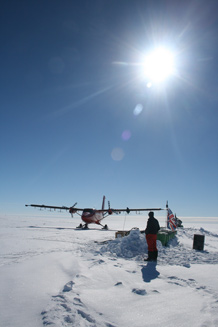 Two researchers from the University of Exeter will be braving temperatures of -30C as they head to Antarctica to carry out important research on one of the world’s largest ice sheets.

Professor Chris Turney and Dr Chris Fogwill, both from the University’s School of Geography, College of Life and Environmental Sciences, are heading to the frozen landscape of the Ellsworth Mountains, the highest mountains in Antarctica, for three weeks of field work.

The research, funded by the Australian Research Council (ARC), aims to answer questions about the long-term stability of the West Antarctic Ice Sheet. This contains about 25 million cubic km of water – enough to raise global sea-levels by more than 3 metres if it were to completely melt.

Professor Turney said: “This ice sheet has started to change and reduce in size. We need to find out more about why and how this is happening, but most of the information we have is from satellite data which has only recently become available. This research expedition will help give a longer term perspective.

“When the Earth was last in a warmer period, there’s evidence to suggest large parts of the ice sheet did disappear. If that were to happen again, it could be a major tipping point in terms of climate change, so the more we can find out the better.”

To study the rocks, the two researches will be using a state of the art method called cosmogenic dating which relies on radiation left over from the Big Bang – the cataclysmic event which scientists believe created the Universe.

Dr Fogwill said: “We’ll be collecting rocks in the Ellsworth Mountains to find out when they were last exposed to the radiation left over from the Big Bang, which effectively tells us when the ice sheet last melted. This will give a valuable insight into how this sector of the ice sheet has behaved over the past 12,000 years or so. We’ll also know whether the changes we’re seeing now are just starting or have been ongoing for some time.”

The pair will be spending most of their time in Antarctica in a base camp on the mountains, and are expecting to be facing some harsh conditions – despite the fact it is the Antarctic summertime.

“Although it has been pretty cold in the UK recently, it’s still going to be quite a bit colder in Antarctica”, Dr Fogwill added. “We’d expect temperatures to go down to about -30C on a regular basis, so we’ll be well prepared for the cold.”

During their time in the field, the pair will be providing regular updates on their work and the conditions they face through Twitter.

The pair expect to report back on their research findings later in 2011.