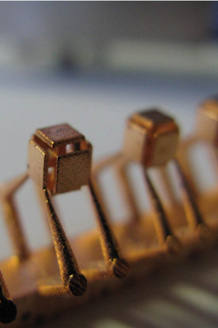 Invisibility cloak to be unveiled with new research

Becoming invisible with the swish of a cloak as in J K Rowling’s Harry Potter novels could soon be a reality with a £4.5 million research project.

The University of Exeter is working with three other UK universities on the project, Quest for Ultimate Electromagnetics using Spatial Transformations (QUEST).

Funded by the Engineering and Physical Sciences Research Council (EPSRC), QUEST aims to transform the science fiction of invisibility into practical technology.

The research will focus on developing practical applications of spatial transformations for communication, wireless energy transfer, sensors and security.

The University of Exeter has been exploring the physics of these so-called ‘metamaterials’ for the past decade. Metamaterials are very carefully structured materials which have been designed to interact with electromagnetic waves or sound waves in ways that no naturally-occurring material can. The University of Exeter team has already been developing structures that block sound very efficiently, designing new anti-counterfeiting technologies and discovering novel ways of making paper whiter without the use of chemicals. The University has worked closely with industry partners to develop these new technologies.

Dr Alastair Hibbins of the University of Exeter’s College of Engineering, Mathematics and Physical Sciences, said: “This award from the EPSRC marks the start of what promises to be a particularly exciting phase of research. This project will give us the flexibility and freedom to do some very exciting work from improving wifi connections and demonstrating wireless charging of mobile phones to building better sound proofed rooms, and perhaps even making things disappear completely!”

Professor Yang Hao from Queen Mary’s School of Electronic Engineering and Computer Science, who leads the five-year project, said: “There has been intensive research into the principles of invisibility science which has now matured to the point that the next big step is to use the insights of theory to produce practical devices.

Queen Mary’s team, including Professor Hao and Professor Clive Parini, will focus on the project’s engineering applications while Dr Alastair Hibbins, Professor Bill Barnes and Professor Roy Sambles will lead a team in the School of Physics at the University of Exeter to turn theory into experiment.

A team at the University of Oxford, led by Professor Patrick Grant and Professor Chris Grovenor, will develop the new materials required for practical applications.

One of the pioneers of spatial transformation theory, Professor Ulf Leonhardt at the University of St Andrews, will direct the theory element of the new research.

Science magazine recently listed research in transformation optics among the top 10 science breakthroughs of the last decade. These are so-called metamaterials unavailable in nature in which the microstructure is contrived in the laboratory to create unusual electromagnetic properties such as bending of electromagnetic waves.

Metamaterials pioneer, Sir John Pendry, will sit on the advisory board of the new project, which will be headed by Professor Peter Clarricoats who has spearheaded antenna research in the UK.

Wireless technologies based on electromagnetic waves are all around us - including mobile phones, wi-fi for computers, security scanners and many more. By combining theory with experiment and computer simulations with materials science, QUEST will create new products for wireless technology. For example, with the right sort of materials and devices it may no longer be required to switch off mobile phones in aeroplanes.

Wireless antennas may become smaller, more effective and unrecognisable so that they can be sewn into clothing in an increasingly wireless world.

Exactly what form these devices will take is not yet clear – the research will help inform that. The grant from EPSRC will allow the researchers the flexibility and freedom to achieve the – almost – impossible with electromagnetic waves.

EPSRC is the UK’s main agency for funding research in engineering and physical sciences. EPSRC invests around £800m a year in research and postgraduate training, to help the nation handle the next generation of technological change.

The areas covered range from information technology to structural engineering, and mathematics to materials science. This research forms the basis for future economic development in the UK and improvements for everyone's health, lifestyle and culture. EPSRC works alongside other Research Councils with responsibility for other areas of research. The Research Councils work collectively on issues of common concern via research Councils UK.