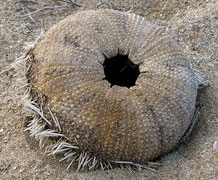 Scientists have successfully created synthetic crystals whose structures and properties mimic those of naturally-occurring biominerals such as seashells.

The findings, published in the journal Nature Materials, could be an important step in the development of high-performance materials, which could be manufactured under environmentally-friendly conditions.

Professor Stephen Eichhorn, who has just moved to the University of Exeter from the University of Manchester, played a key role in the research. Professor Eichhorn has been appointed to a Chair in Functional Materials, through the University of Exeter’s £230 million investment in science, medicine and engineering. Exeter’s vision is for a multidisciplinary and interdisciplinary approach to the understanding and application of functional materials - from fundamentals to manufacture - exploiting world-leading materials knowledge to deliver new concepts, processes and products.

Biological minerals or ‘biominerals’ occur widely throughout nature in structures such as bones, teeth and seashells and frequently show remarkable shapes and properties compared with their synthetic counterparts. A key feature of biominerals is that they are composite materials, made from an inorganic mineral such as calcium carbonate which contains a small amount of organic material, usually a protein.

The resulting structures are incredibly hard and their mechanical properties can rival those of man-made materials such as ceramics, which are typically manufactured under high temperatures and pressures, giving less opportunity for control over the material properties.

Scientists are interested in understanding how biology is able to perform such precision engineering in water at ambient temperatures so they can apply this principle to the design and production of synthetic materials that are much greener than existing ones.

Now a team has succeeded in creating artificial biominerals that exhibit similar properties to biominerals such as sea urchin spines.

They did this by growing calcite crystals in the presence of synthetic polymer nanoparticles which act as artificial proteins. These nanoparticles are incorporated into the architecture of the crystal as it grows to create a composite material.

The researchers also tested the mechanical properties of the composite material using a nanoindenter, a small chisel-like tool that can prod a material and record its response to a force.

Professor Stephen Eichhorn said: "Biological examples of calcium carbonate-based structures have a higher hardness than pure mineral without proteins present. It is remarkable that we have been able to achieve the same result using a synthetic 'pseudo' protein."

"When I began researching the mechanical properties of seashells at Manchester my first PhD student and I literally collected them with a bucket and spade on the beach. I didn't imagine that we would get to the stage of being able to measure similar properties for materials made in the lab."

Lead researcher Professor Fiona Meldrum of the University of Leeds said: “This method of creating synthetic biominerals gives us a unique insight into the structure of these incredible materials and the way the organic molecules are incorporated into the crystal structure at a microscopic level. We can then relate this microscopic structure to the mechanical properties of the material.

“What we found is that the artificial biomineral we have created is actually much harder than the pure calcite mineral because it is a composite material – where you add something soft to a hard substance to create something even harder than either of the constituent parts.”

The researchers will now try to replicate their technique using different minerals. The research was a collaboration between the Universities of Leeds, Sheffield, Manchester and York, and the Israel Institute of Technology. It was funded by the Engineering and Physical Sciences Research Council.