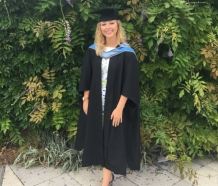 A student researcher who specialises in type 1 diabetes, after being diagnosed herself in her teens, has now launched a blog to demystify the condition.

“The general idea is to combat the various myths surrounding diabetes – that I can’t eat sugar, or that I can’t drink alcohol,” she said. “I’m trying to give an insight into my life with type 1 diabetes. There’s probably lots of people you know who you don’t realise actually have type 1 until they whip out a needle and start injecting themselves next to you.

“Hopefully I’m showing that I can do everything anyone else can do. It just requires a little more thought.”

The cause for type 1 diabetes is unknown, and there is nothing Alice could have done to prevent it.

An autoimmune disease, the condition causes the body to attack insulin producing cells found in the pancreas. This means the body can’t produce any insulin at all, which is necessary to live. People with type 1 therefore depend on insulin which they have to inject themselves.

Without insulin, glucose remains in the blood which is catastrophic for the body. If a person goes undiagnosed and untreated, this short-term can lead to death.

By contrast, people with type 2 diabetes still produce insulin but their bodies are less sensitive to it, which means the body has to make even more insulin to achieve a glucose-lowering effect. Type 2 diabetes is usually treated with tablets and lifestyle changes which help increase the body’s sensitivity and slow the progression of the disease.

Alice’s blog ranges from fact-checking and myth-busting – giving insights into complications –to her daily routines and the unexpected hurdles the condition presents.

Type 1 diabetes has both a human and monetary cost. Despite the estimated £10 billion spent by the NHS on diabetes – £27 million a day, £315 a second – 58.7% of people with type 1 diabetes in England and Wales don’t receive all 8 annual health checks necessary to manage their diabetes effectively.

“It’s difficult living with type 1 diabetes because sometimes there’s no real pattern to it. You’re constantly having to learn how your body responds to the disease, and I’m still learning to live with it even now,” she said.

Since starting her PhD, Alice is seizing opportunities to make a difference. “I’m passionate about helping others that may be struggling with a type 1 diagnosis. I’m working towards the goal of better treatment and hopefully a cure. I’d like to be able to say ‘I had type 1 diabetes once’.”