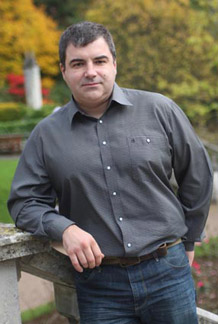 The University of Exeter laid on a warm welcome for 2010 Nobel Prize winner, Professor Kostya Novoselov.

A capacity crowd of nearly 400 packed into the University’s biggest lecture theatre to hear about the research which led to the discovery of graphene, the thinnest known conducting material.

Professor Novoselov, along with Andre Geim, is famous for his discovery of the material – a single layer of graphite just one atom thick which has some remarkable properties and could revolutionise computing and high-tech devices.

Professor Nick Talbot, Deputy Vice Chancellor for Research and Knowledge Transfer at the University of Exeter, said: “It was a real honour to have Professor Novoselov here to talk about this fascinating subject and it was fantastic to see such a strong interest from our students in the audience. The hall was so full that some people were even sitting in the aisles.”

“There were lots of questions, particularly from our students, and they were all well-informed and articulate. Many stayed after the lecture to meet Professor Novoselov, who was overwhelmed by the positive response to his presentation.”

Kostya Novoselov is a Professor at the University of Manchester, and jointly won this year’s Nobel Prize for Physics for the discovery of graphene.

Exeter is also a leader in graphene research  – it hosts the Centre for Graphene Science, a joint venture with the University of Bath. The Centre was launched in 2008 with a £5 million Science and Innovation Award from the Engineering and Physical Sciences Research Council (EPSRC) and the Higher Education Funding Council (HEFCE), under the leadership of the late Professor Alex Savchenko.

Together Exeter and Bath provide state-of-the-art facilities and high-quality research environments. The Centre is also the hub of an international network of leading institutions and industries working on graphene.